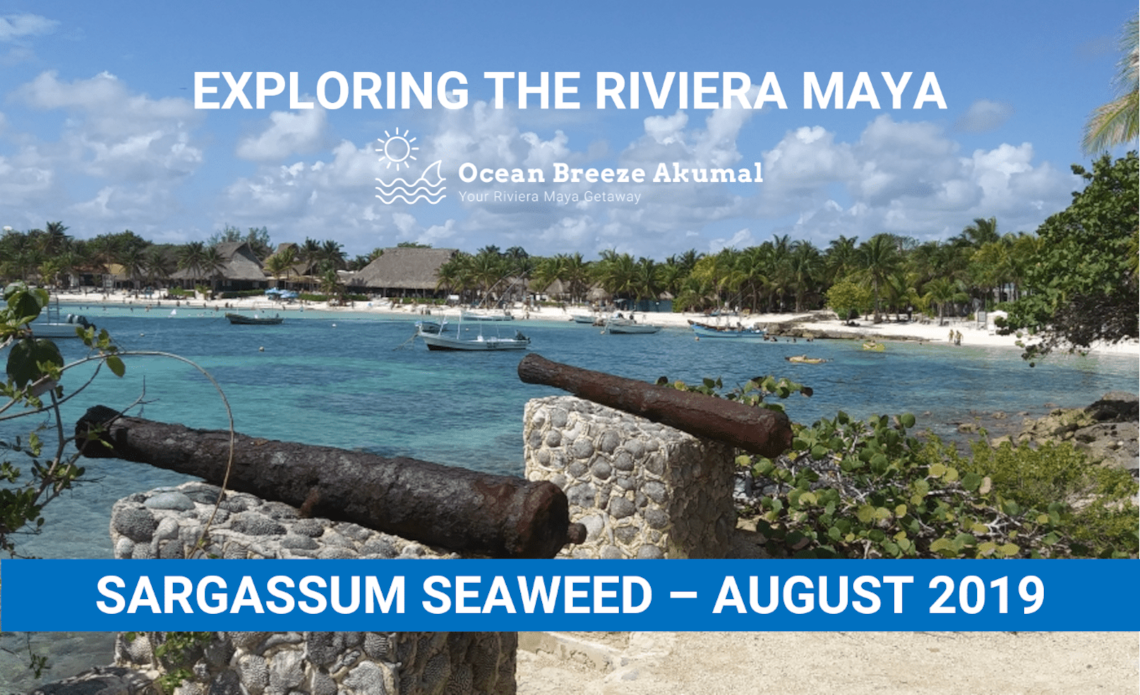 SARGASSUM SEAWEED IN THE RIVIERA MAYA

Have you heard about the seaweed accumulating in Mexico? Are you wondering what it is and where it’s from? Or which beaches do and don’t have much seaweed? Or, if seaweed is on your beach while on holiday, what should you do? How is it affecting marine life in the area?  What is being done about it? And perhaps most importantly, are there still seaweed free beaches and plenty of things to do, so you have a vacation experience of a lifetime? Finally, is the seaweed getting worse, or is it improving? Read on and find out.

What Is Sargassum Seaweed?

Sargassum seaweed was named by Portuguese sailors on a Christopher Columbus voyage across the Atlantic. The sailors were passing across the Sargasso Sea at the time. The Sargassum consists of brown algae and small ‘air bladders’ that keep the seaweed afloat. Growing to a length of several meters it is present throughout tropical areas of the world. It is the only seaweed that doesn’t begin life attached to the ocean floor. Instead, the ocean currents and wind push it around. While its edges lock together like Velcro to form large mats, it gets pulled apart in windy storms. 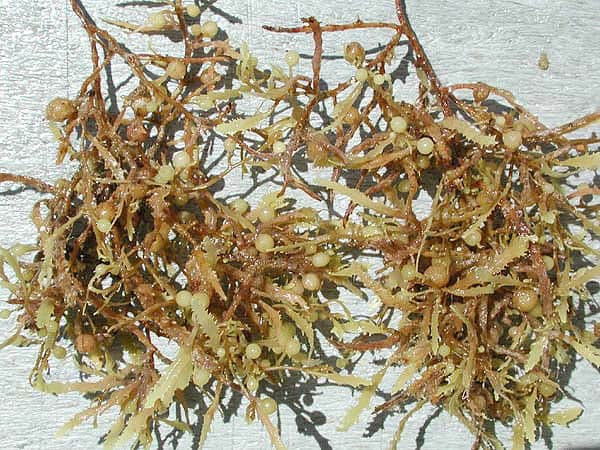 The large mats of Sargassum drift along propelled by wind and ocean currents. These mats provide shelter to over 100 marine species as well as a home to those that live within the seaweed. For instance, the Sargassum fish (pictured on the right), has developed camouflage to hide from predators. As well, young sea turtles use the Sargassum for shelter and food until they are large enough to survive elsewhere. Other species dependent on the seaweed include crabs, shrimp, squid, snails, eels, and fish including Mahi-Mahi. 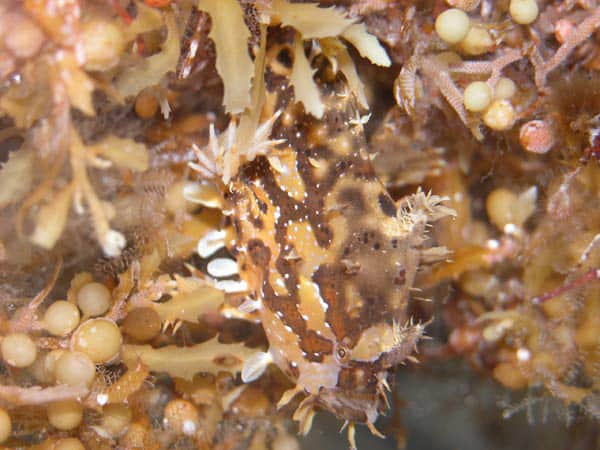 Why Is There So Much Seaweed Currently?

Sargassum seaweed grows and declines based on seasonal changes in water temperature. Only a few years ago there were concerns about declining Sargassum. At that time restrictions limited the amount harvested for animal feed and fertilizer.

As well, changes in ocean currents are also why more seaweed is hitting some coastlines. For example, ocean currents have diverted seaweed from the Sargasso Sea (near Bermuda) towards other areas in the Caribbean.

While there are impacts on tourism from the increase in seaweed, it poses little to no health risk to humans. The seaweed if left to accumulate, however, can form large banks making access to the ocean less pleasurable. Also, if left it will begin to compost and decompose. All making it less desirable for tourists and beach vacation goers.

But, what is the impact on marine life? If the seaweed provides habitat and protection for some species isn’t it a good thing to have more seaweed? That may be the case when it is out in the middle of the ocean, but when it hits the shoreline it can create other problems.

Accumulation of seaweed on beaches impedes turtles accessing nesting sites. As well, baby turtle deaths have been reported from hatchlings being unable to get to open water. Also, as the Sargassum decays it consumes oxygen, which can impact marine life in coastal areas. Coral reefs, juvenile fish, some shellfish species and seagrass could all be affected.

What Is Being Done To Reduce The Seaweed

While the seaweed only takes 8-16 days to decompose, several jurisdictions, have acted. Removal of the seaweed from beaches is a major activity now. For example, hotel operators use workers to remove the seaweed from their beaches. But, they are also offering shuttle buses to beaches that are less affected by the seaweed. Also in Barbados equipment to load sugar cane now picks Sargassum off the beaches. While in Guadeloupe a new boat collects the seaweed using a conveyor belt.

Similarly, the Mexican Government is hiring personal to collect and remove seaweed. Between the federal and municipal governments, a budget of over $11M USD is set to combat the problem. This funds 9 actions being undertaken. These include the following

Other actions include social and economic impacts, sustainable management, restoration, research, technology and planning.As well as looking at international and cross-border solutions.

Research by other countries is also being conducted to track algae blooms and find uses for the seaweed, once collected. For instance, in St. Lucia one company is creating a plant tonic out of it. In Tortola, potential uses are as a biofuel, and in landfills, and as a mulch for crops. While there is also the potential for medical and pharmaceutical uses. Knowing its healthy properties, the Chinese have used the Sargassum seaweed as a medicine since the 8th century.

Another use for the seaweed is to build up sand dunes, to combat the threat of erosion from storm surges. Also, in Barbados, they are starting to produce fertilizer from the collected seaweed. While other uses for the seaweed could be to use it in Asian inspired recipes. For example, stir-fried and then simmered in water and soy sauce with vegetables makes a healthy meal!

Beaches That Are Mostly Seaweed Free

Finding beaches that are likely seaweed free during a time when seaweed is plentiful isn’t as daunting as it may seem. First of all, find those beaches sheltered from the ocean currents and wind. While that’s helpful, as ocean currents and winds change so can where the seaweed lands. So local knowledge is required (see a list of beaches later).

While some beaches often receive more seaweed than others it also depends on how it is managed. Because of the work to remove the seaweed, a beach that receives a lot of seaweed can have less seaweed than others that don't manage it as well. For instance, some maps show a high abundance of seaweed hitting certain beaches, but these can be misleading. Parts of the beach may have seaweed, but specific sections that are more sheltered and/or better maintained can be devoid of it.

So, when looking for a beach to visit during a high growth seaweed year it’s best to have local knowledge. For example, the coastline south of Playa Del Carmen and past Akumal can sometimes be reported with high levels of seaweed. However, beaches such as Akumal Bay and Xpu-Ha often have much less seaweed. This is in part due to coordinated efforts to remove it regularly. Also, Akumal Bay has sections even in extreme times, where there is little seaweed. This is in part because of the curvature of the bay and the reef. Similarly, South Akumal, such as the beach at Aventuras Akumal, often receives less seaweed than other beaches. However, Xcacel a little further south has lots of accumulated seaweed because it is not removed as frequently as in other areas.

Currently, beaches south of Tulum are receiving a lot of Sargassum seaweed. However, you should check with the specific beach. If you contact the local beaches and beach clubs, they will often send you a picture of the beach so you can see the conditions that day. For example, La Playa Xpu-Ha Beach Club post a picture daily on their Facebook page. Or, you can visit the Sargassum Early Advisory System. By searching their system, you can look at forecasts for predicted amounts of Sargassum throughout the Caribbean.

More information on each of these beaches and their locations can be found here.

What To Do If Your Beach Has Seaweed

The seaweed conditions can change from one day to the next. So often it’s a case of waiting for a day or 2 till the seaweed has cleared, or finding another less affected beach. However, unlike some other Caribbean destinations, the Riviera Maya has many activities that you can do, besides going to the beach. It was one reason why the Riviera Maya was recently voted the best vacation destination in Mexico. So perhaps its time to try one of these for a couple of days.

The Riviera Maya has an extension number of interesting Mayan archeological sites. They range from smaller off the beaten path ruins to large and impressive sites. Read our review of Mayan Ruins in Mexico to find out more.

Cenotes are natural sinkholes created where a cave ceiling has collapsed and left natural swimming pools. These caves were the only source of water in the jungle for the Mayan civilization. There are over 6000 different cenotes in the Yucatan Peninsula of Mexico alone for you to explore!

Even on beaches with a lot of seaweed, a short distance offshore the water is likely clear. In 2019 Scuba Diving Magazine voted the Riviera Maya the #1 place to scuba dive in the world. As well as the ocean, cenotes also attract cave divers who explore the extensive labyrinth of the caves.

Or ask a Dive center to take you out to a large mat of Sargassum. Sargassum mats can make excellent dive sites because of the many critters living in them and the predators that hang out around them. "Diving under sargassum is like diving in another world," Billy Causey, Southeast Regional Director for NOAA's Office of Marine Sanctuaries.

At various points along the Riviera Maya are several adventure and water parks. Such as Xplor, Xcaret, and Aktun-Chen. Activities include caving, snorkelling in underground rivers, ziplining, parachuting, rafting, driving ATV’s and amphibious vehicles through the jungle. You won’t find any seaweed there!

Although Sargassum seaweed in the ocean supports life and a unique ecosystem, it also threatens marine life at or close to shore. Increased seaweed growth affects all Caribbean countries. But the Mexican Government has made resolving this a priority. And through a variety of ways, it is tackling it. Fortunately, there is evidence to suggest that the worst of the seaweed of 2019 is over. Even so, you now have suggestions for beaches to try where there is likely less seaweed. Or other activities to do for a few days instead.

Our thanks go to the following organizations who provided input and information for this article.

Centro Ecologico Akumal - Our mission “is to work for environmental sustainability in the Mexican Caribbean through research, education, ecosystem management, and advocacy. Our goal is for Akumal to serve as a model for sustainable tourism in the region.”

Akumal Dive Center - The Akumal Dive Center, located adjacent to the Lol Ha restaurant and conveniently in the center of Akumal Bay. Dives are at 9:30, 11:30 and 2:30. We offer dive certification, cenote dives and daily dives in the surrounding reefs.

La Playa Xpu-Ha Beach - Beachfront restaurant, bar and beach club. A perfect place to enjoy alone or with the family. La Playa Xpu Ha had become one of the principal attractions for locals and tourist for the safe family atmosphere and for the great sea food restaurant an also dishes for everyone, tacos and hamburgers.

This article on Sargassum Seaweed In the Riviera Maya provides information to help you have a vacation experience of a lifetime. If you have questions don’t hesitate to contact us at info@oceanbreezeakumal.com, @oceanbreezeakumal, or call us at +1 250 538 8159.

If you found this post interesting we'd appreciate getting a like or share below. If you don't want to miss future posts enter your email in the subscription box below. Here is where you can read our other BLOG posts.

Delen
Loading...
Upps!
You're running a web browser we don't fully support. Please upgrade it for a better experience.
Our site works best with Google Chrome.
How to upgrade the browser