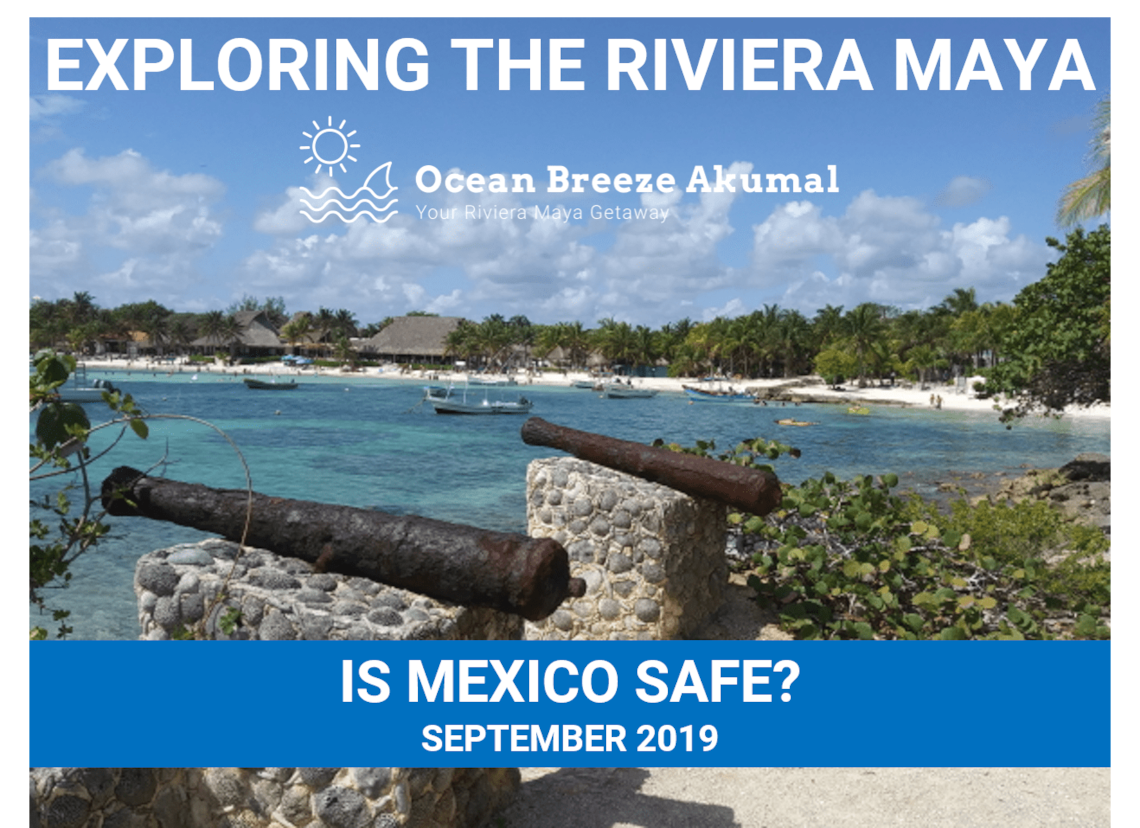 Most of the year I live on Salt Spring Island, in Canada. It’s a rural community of 10,000 ish people and crime is so low most people don’t lock their front doors or cars. When we hear the blip of a car alarm we nod knowingly that the person must be a tourist visiting the island.

Throughout the year I go to Akumal in the Riviera Maya, Mexico and spend time there. Friends of mine had questions about how safe is it in Mexico? My instinctive answer was “Very safe indeed why?” But for some, they didn’t seem convinced. Then friends of our daughters refused to let their daughter go on a trip to Mexico as it was too dangerous. Ok, hold your horses there, what’s going on? To me and the experience I’ve had, that’s plain crazy.

So, I decided to investigate crime in Mexico. Looking to find the difference between my experience and what some people were perceiving of Mexico. And to answer the question, ‘Is Mexico Safe?’

How Safe Is Mexico Compared To Canada, USA, And The UK?

To start I decided to base this on factual data where I could. Rather than only giving an account of my experiences alone. So, I focused on finding comparable statistics on crime in Mexico, Canada, USA, and the UK. Fortunately, there’s a neat resource, Nation Master. It allows you to compare statistics, including crime across countries. But, most countries don’t collect statistics on all the same crimes, so it made it a little harder to find direct comparisons. However, there were 4 crimes with statistics collected for Mexico, Canada, USA, and the UK. Also, they collect them for a long list of other countries too. In addition, these crimes seemed to cover a wide range of criminal activity.

Mexico compares favourably to the USA, Canada, and the UK, having the lowest crime rates in 3 out of the 4 categories. The UK, surprisingly, ranked highest in 3 out of 4 categories. Begging the question ‘is the UK a safe place to travel to?’ Being an ex-pat Brit I kinda find that one amusing.

Is Mexico Safe Compared To Elsewhere In The Americas?

Despite having the lowest total crime rates out of the four countries, Mexico, did rank second in the murder with firearms. In researching further, I found interesting insights from a University of San Diego study (Organized Crime and Violence in Mexico, Analysis Through 2018, Justice in Mexico, Department of Political Science & International Relations, University of San Diego, April 2019, by Laura Y. Calderón, Kimberly Heinle, Octavio Rodríguez Ferreira, and David A. Shirk).

There have been increases in violent crime in Mexico. However, rates for homicide levels, are far worse elsewhere in the Western Hemisphere. Also in the Americas, Mexico’s homicide rate is below Belize, Saint Vincent and the Grenadines, Guatemala, Honduras, Jamaica, and the Bahamas amongst others (see chart below). 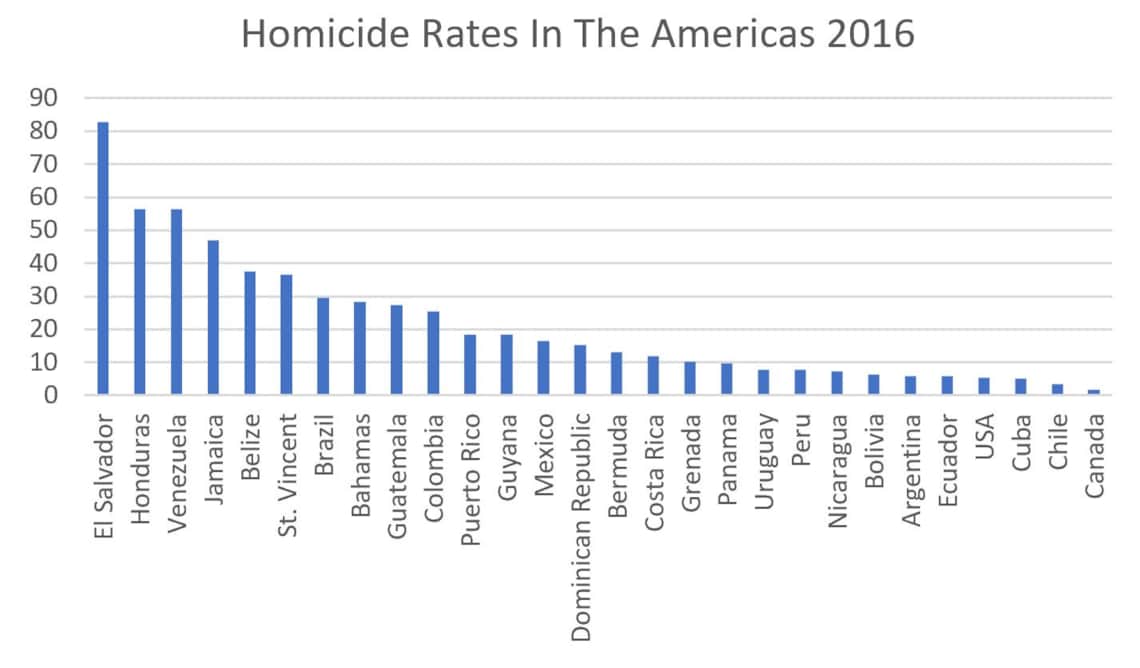 Causes And Distribution Of Violent Crime In Mexico

According to the study up to 2/3’s of violent crimes in Mexico are by organized crime groups. In recent years violence has changed as the major cartels have become fragmented due to government enforcement. The study states

“While there is a general perception that Mexico’s violence is pervasive and persistent throughout the country, violence has been highly localized, sporadic, and geographically specific”.

“homicides have been regionally concentrated in the major drug trafficking zones in the northwest and the Pacific Coast.” 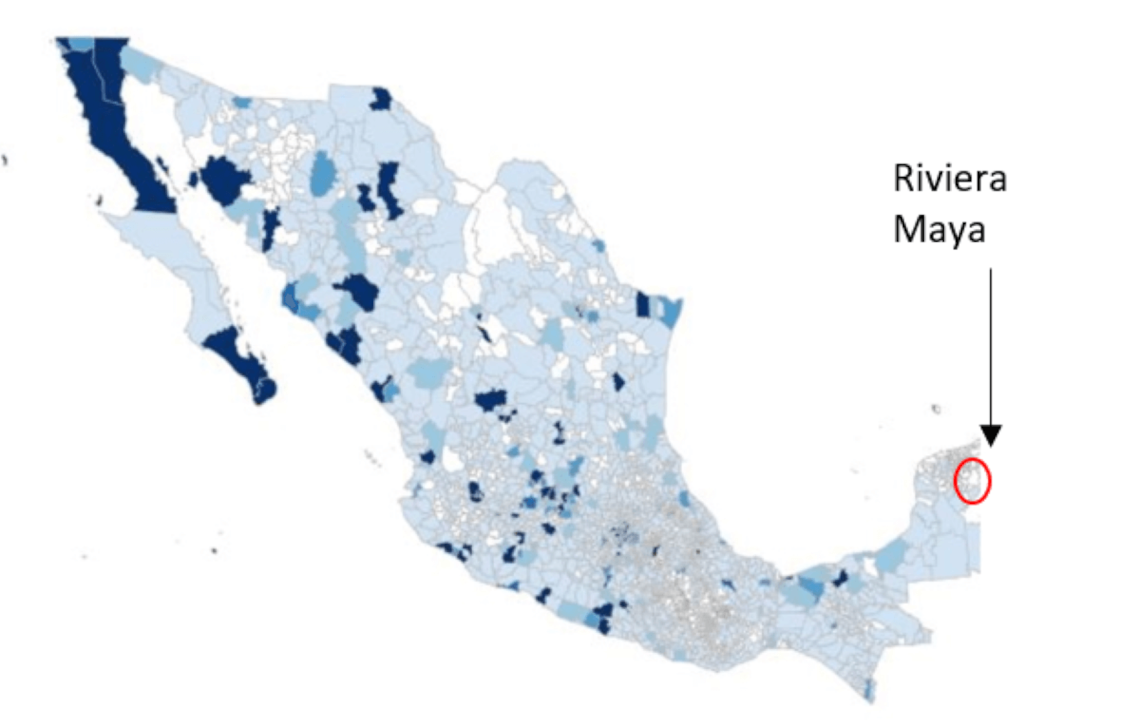 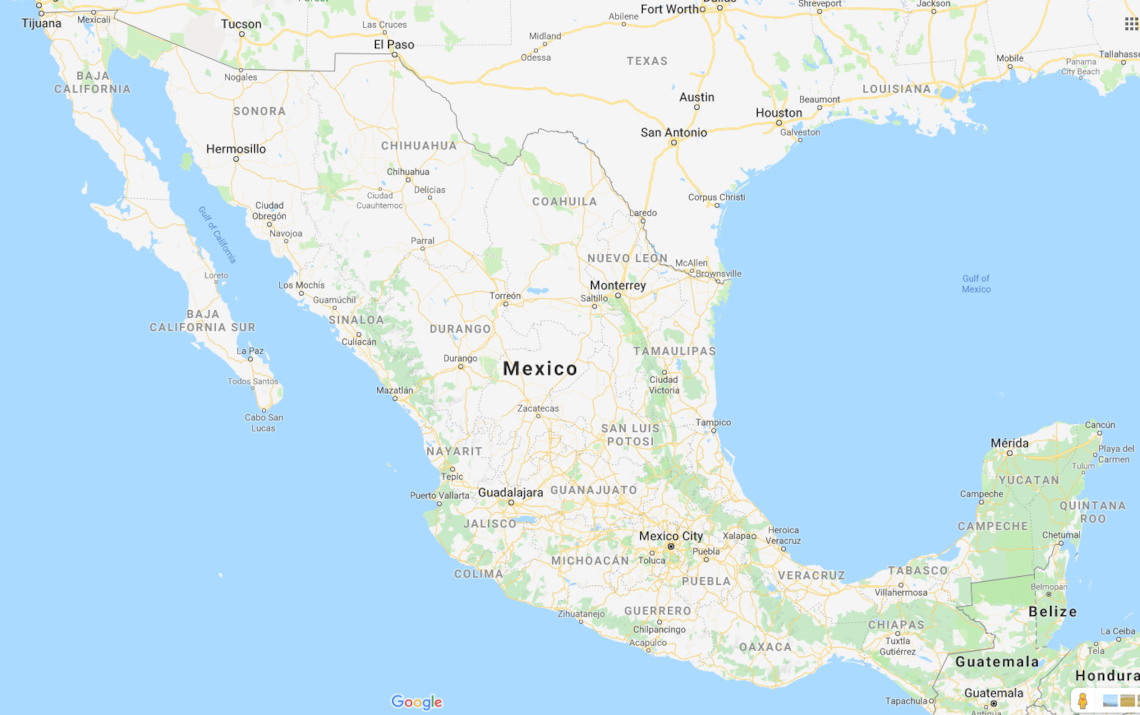 The map above left, shows that homicides (2017) have been regionally concentrated in the major drug trafficking zones in the northwest, northeast, and the Pacific Coast.

Is The Riviera Maya Safe?

As you can see from the above chart violent crime in the Riviera Maya is one of the lowest in the country. Crime rates in the Riviera Maya are low not only compared to Mexico overall. They are also lower than in other tourism places: Puerto Vallarta, Acapulco, Manzanillo, Mazatlan, and other Pacific Coast areas. However, this isn't that surprising. As the Riviera Maya is the number one tourist area in Mexico it generates more revenue for the economy than any other area. The Mexican government understands this and has focused security efforts on ensuring the region is safe.

What Else Is The Mexican Government Doing To Ensure Mexico Is Safe?

Besides, cracking down on organized crime, the Mexican Government recently took extra measures. New President Lopez Obrador has created a National Guard. This 60,000-person armed security force is staffed from the ranks of the Mexican military and police. Ultimately, it is to create a highly trained, and well-staffed force. Their focus is to confront law enforcement challenges, primarily focusing on organized crime.

So Is Mexico Safe?

We’ve shown that Mexico, compared to the USA, Canada and the UK, is the safest out of these 4 countries based on Opiate Drug, Car Theft, and Total Crimes committed. We’ve also shown that despite recent increases in some violent crime, Mexico is one of the safer countries in the Americas. For instance, it's homicide rate is less than El Salvador, Honduras, Venezuela, Jamaica, Belize, Saint Vincent & the Grenadines, Brazil, Bahamas, Guatemala, Columbia, Puerto Rico, and Guyana.

Even so, the violence that is present is highly localized in specific areas of the country. Up to 2/3’s of it involves organized crime groups. Whereby they inflict violence on each other in localized regions, such as the Northwest and Pacific areas. As such, most tourist areas (except for Acapulco) are also safer than the average areas in Mexico. The Riviera Maya, especially areas south of Cancun, being some of the safest in the country.

Also, I now understand why a few people have been asking me if Mexico is safe to travel to. And I also understand why their perception initially is so different than my experience. Mexico is safe, as long as you avoid the areas with localized crime. And of course, you take basic precautions that you should normally do when travelling.

I now also understand the disconnect between some media reports and the experience I have when I travel to Akumal and the Riviera Maya. My experience is closer to the low crime paradise of Salt Spring Island (a small rural island in Canada’s South Western Pacific coast) than it is to higher crime areas such as Baltimore, Tijuana, Jamaica, Belize, Brazil or even the Bahamas!

Delen
Loading...
Upps!
You're running a web browser we don't fully support. Please upgrade it for a better experience.
Our site works best with Google Chrome.
How to upgrade the browser